Here's my most recent painting of the Crescent City Connection a.k.a. the Mississippi River Bridge in New Orleans, with a ferry landing on the right corner. 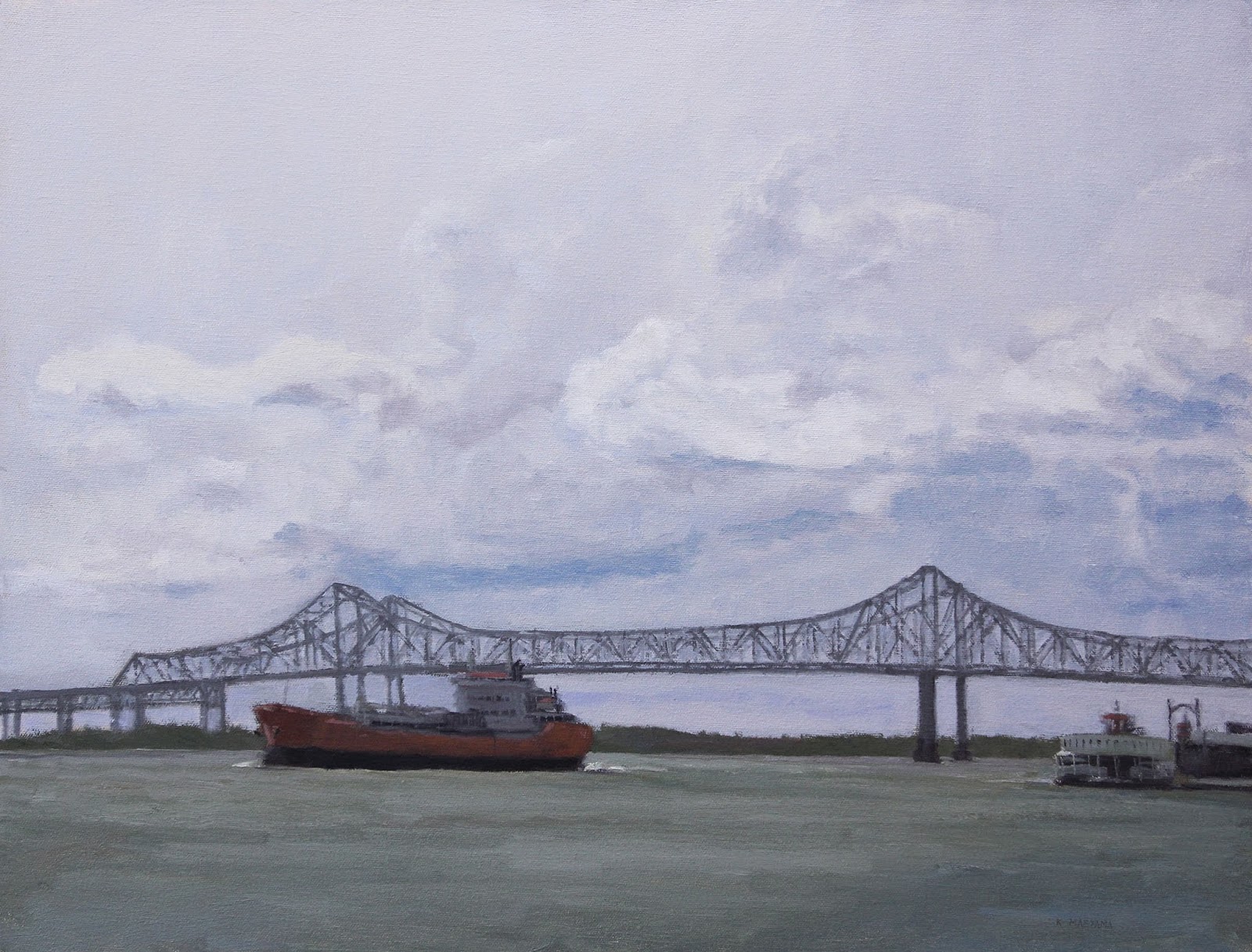 This painting has found a new home in Bay St. Louis, MS. It was worth stickily sticking around at Palmer Park here in New Orleans for the monthly Arts Market, in 90℉, 80% humidity. Yay!

Here is another one from 2013, with a concrete plant & Tchoupitoulas Street. 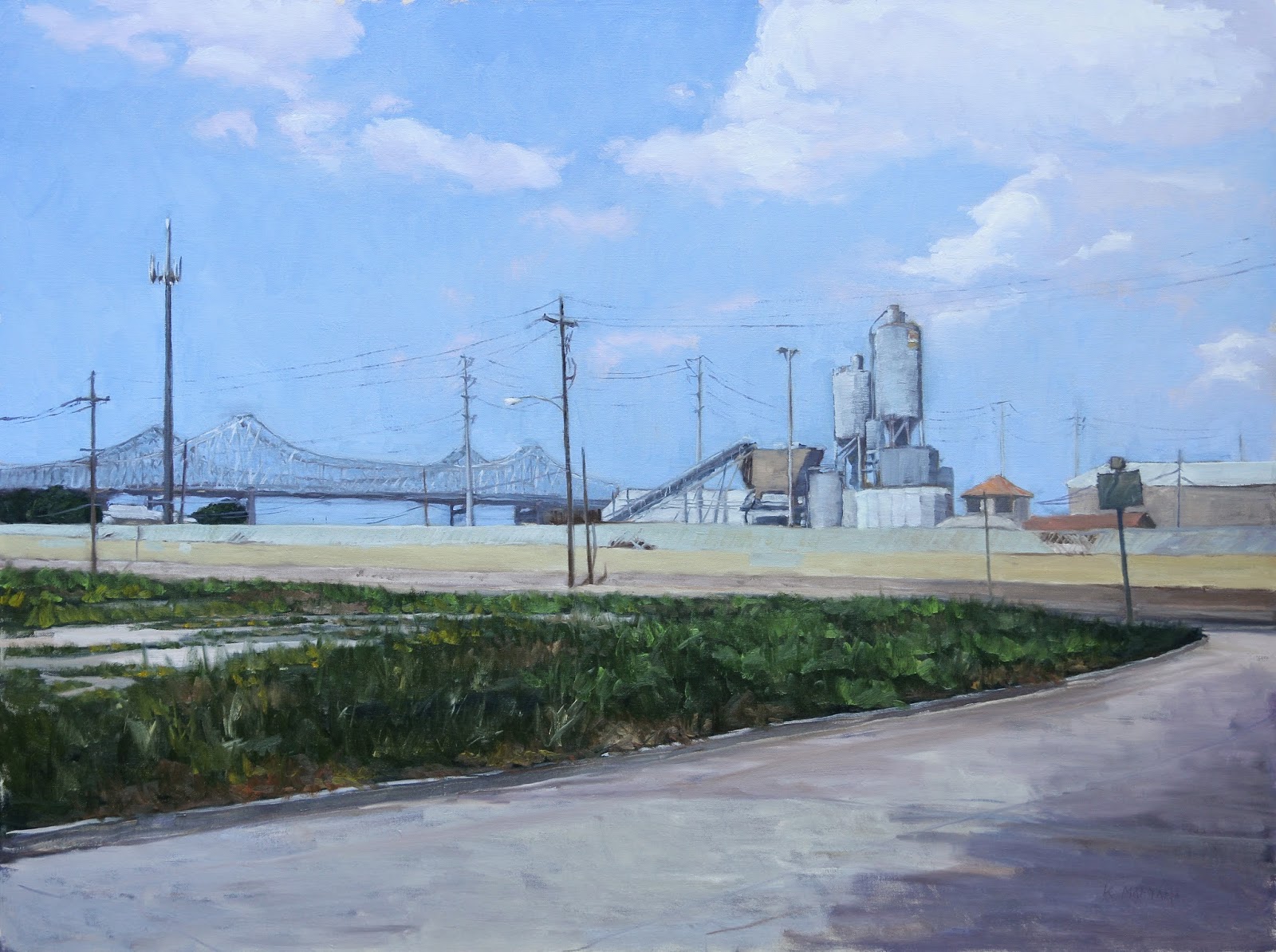 Below is an older one done in 2012, with Market Street Power Plant. 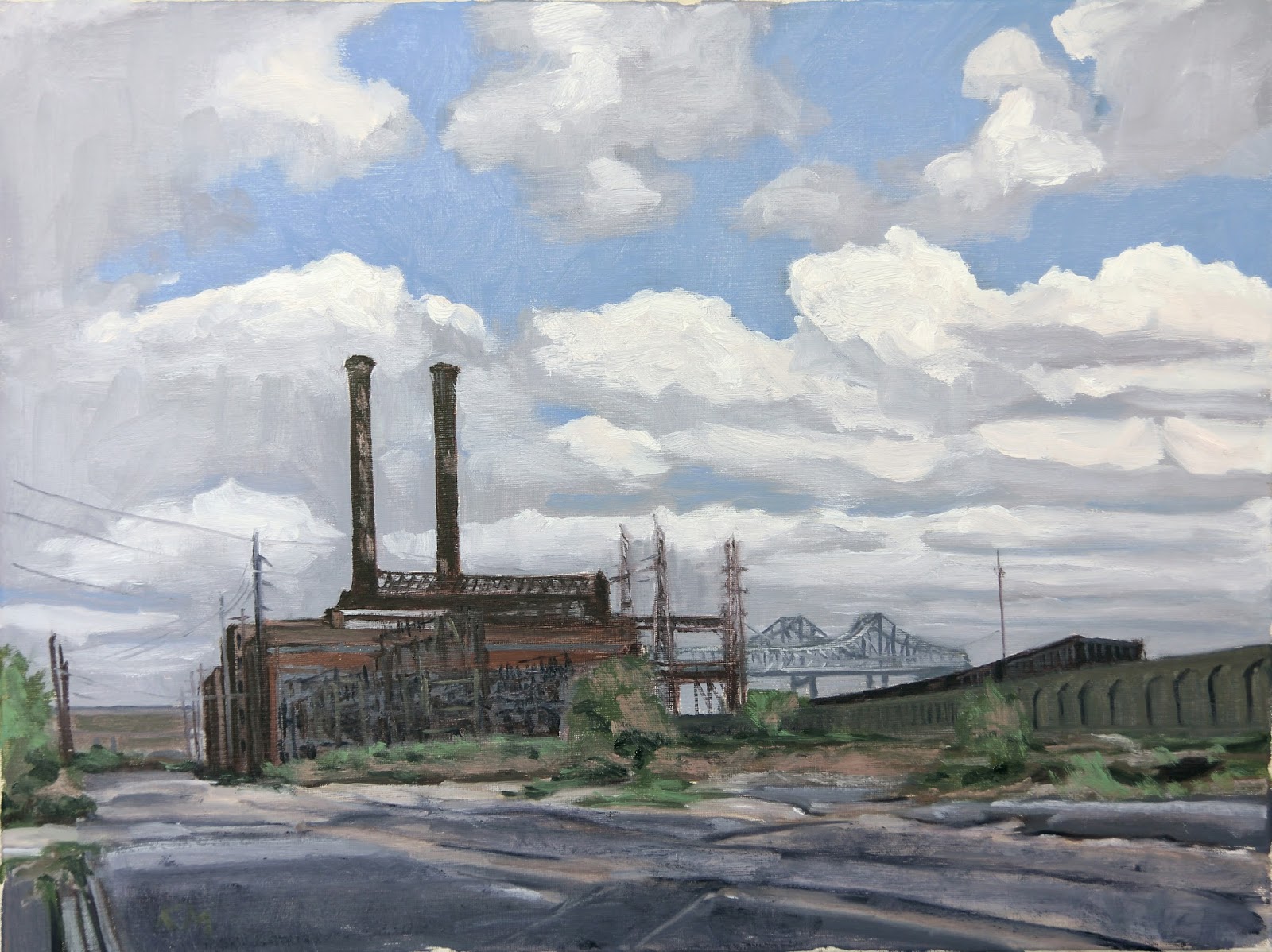 It seems that I'm painting this bridge every summer for 3 years. What Can I do, it's a good looking bridge.

Posted by kaorinola at 4:44 PM No comments:

There are about 120 bars (including restaurants with bars) in French Quarter. I don't know how many more there are in the entire New Orleans area, but there are many, many bars here. Although I didn't (still don't) drink much I had a few places I didn't mind going with my college friends back in the days. One was Coop's Place on Decatur St. near Ursuline St. I used to eat their Rabbit Jambalaya or Mardi Gras Pasta while my friends discussed music and films, wondering off to the Abby, Molly's and the Hideout. A few years later El Matador opened up down the street on the corner of Esplanade Ave. El Matador became my would-be husband's favorite, thanks to the quality bartenders (or "the best looking tattooed up lady bartenders in the Quarter"). They had a circular bar counter in the middle of the main room and Vince Vaughn once served us beer while Supagroup played on stage.

El Matador closed way before 2012, but I painted those from photographs that I took on the last night of their existence. They moved the circular bar to their new home, One Eyed Jacks. My husband still calls that place Shim Sham Club.

In the late '90s Butler's still had cheap beer and Atari's. I was never a regular at Butler's. I lived too far and drank too little to appreciate the place.

Later on, we lived in a place between the Saint and the Halfmoon, and we felt at home. I think I miss that apartment the most probably because that was our home right before and after Hurricane Katrina. The various bars in town were the first to come back - if you reopen your bars, your people will come.


Posted by kaorinola at 4:00 PM No comments:

After the rain, sunny day... 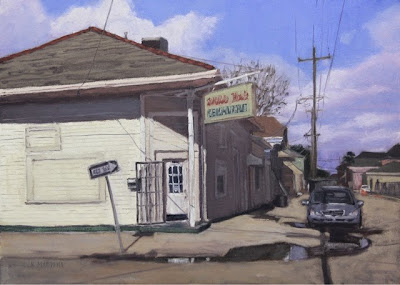 ...and after the rain, cloudy day. 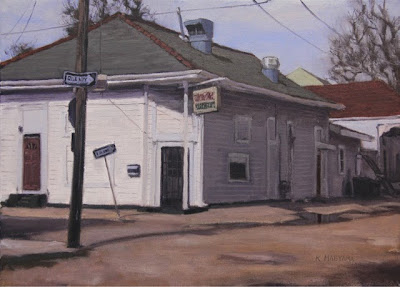 They were closed on that cloudy day.
The sign says Willie Mae's Restaurant but the official name is Willie Mae's Scotch House. They are famous for their fried chicken though my friend who was born on St. Claude Ave. says that McHardy's on N. Broad is the best in town. All I know is that if you buy a bucket at KFCs in Japan you get to eat the chicken tail (or butt...whatever it's called, that triangle-shaped mystery meat) which is the best part of chicken according to my KFC aficionado husband. I tend to agree with him.

Posted by kaorinola at 9:32 PM No comments:

Let's start with a street corner near my house. Spring comes early to New Orleans and this fire hydrant looked so pretty surrounded by all the pink flowers and weeds on a sunny day in March. A few days later, the firefighters had to stomp on them in order to make the hydrant more visible. The weeds grew back but not the pink flowers. Maybe next year.

Posted by kaorinola at 9:10 PM No comments:

Born To Be Wild - New Orleans oil painting blog is here.
I will be posting new paintings as they finish, so stay tuned!

Posted by kaorinola at 2:02 PM No comments: